Ways to get to know and explore the Amazon

There are a variety of ways to get to know the Amazon, the heart of Brazil. The radiant green that surrounds the rivers and that forms the most known tropical forest in the world is the reason for the looks that bring visitors and tourists every year from all parts of the planet.

And what attracted all these people is not only the biodiversity found here, but also the outstanding culture, a rather peculiar gastronomy and the charisma of a welcoming and humble people who welcome everyone who dares to meet them.

Exactly because of all this highlighted, we will start this adventure, where you, dear reader, will be able to know the ways of knowing and exploring the Amazon and everything that it has to offer you.

But before that, be sure to read our previous blog about the trends for post-pandemic trips in the Amazon and the world.

Getting to know the Amazonian capital

Manaus is the capital of the state of Amazonas, located in the northern region of Brazil. This is also the main city within the largest rainforest in the world, and for this reason, it can be considered the gateway for visitors wishing to visit the Brazilian Amazon.

A curiosity that many don’t know, is that the Amazon concentrates most of its activity in Brazil, in states beyond the Amazon, such as Acre, Amapá, Maranhão, Mato Grosso, Pará, Rondônia, Roraima and Tocantins. And besides these, there is the International Amazon composed by other countries, such as Bolivia, Colombia, Ecuador, Guyana, French Guyana, Peru, Suriname and Venezuela.

Manaus is a city that has a tropical and wild nature, and different from what many think, is a big city and has about two million inhabitants. It is an economic and industrial center, besides being the base for numerous important scientific researches that seek to unveil the mysteries of the local fauna and flora.

This wonderful city is also a paradise for ecotourists, who like to stay in hotels in the middle of the jungle, being able to enjoy the river beaches of the Amazon River.

Every year the city receives transatlantic ships with thousands of tourists from various parts of America, Asia and Europe, which have access through the mouth of the river.

What to do in Manaus

The Historic Center of Manaus is the central part of the city and has an immense variety of giant houses and palaces that mark a very rich period, known as Belle Époque.

The most iconic building in this region is the Amazon Theater, the most famous attraction in the city, due to the fact that it is impressive to find such an elegant and pompous building in the middle of the Amazon.

It was built in 1896 with materials brought from Europe, and the city of Manaus was in search of greatness, becoming a city full of technologies and luxurious buildings. 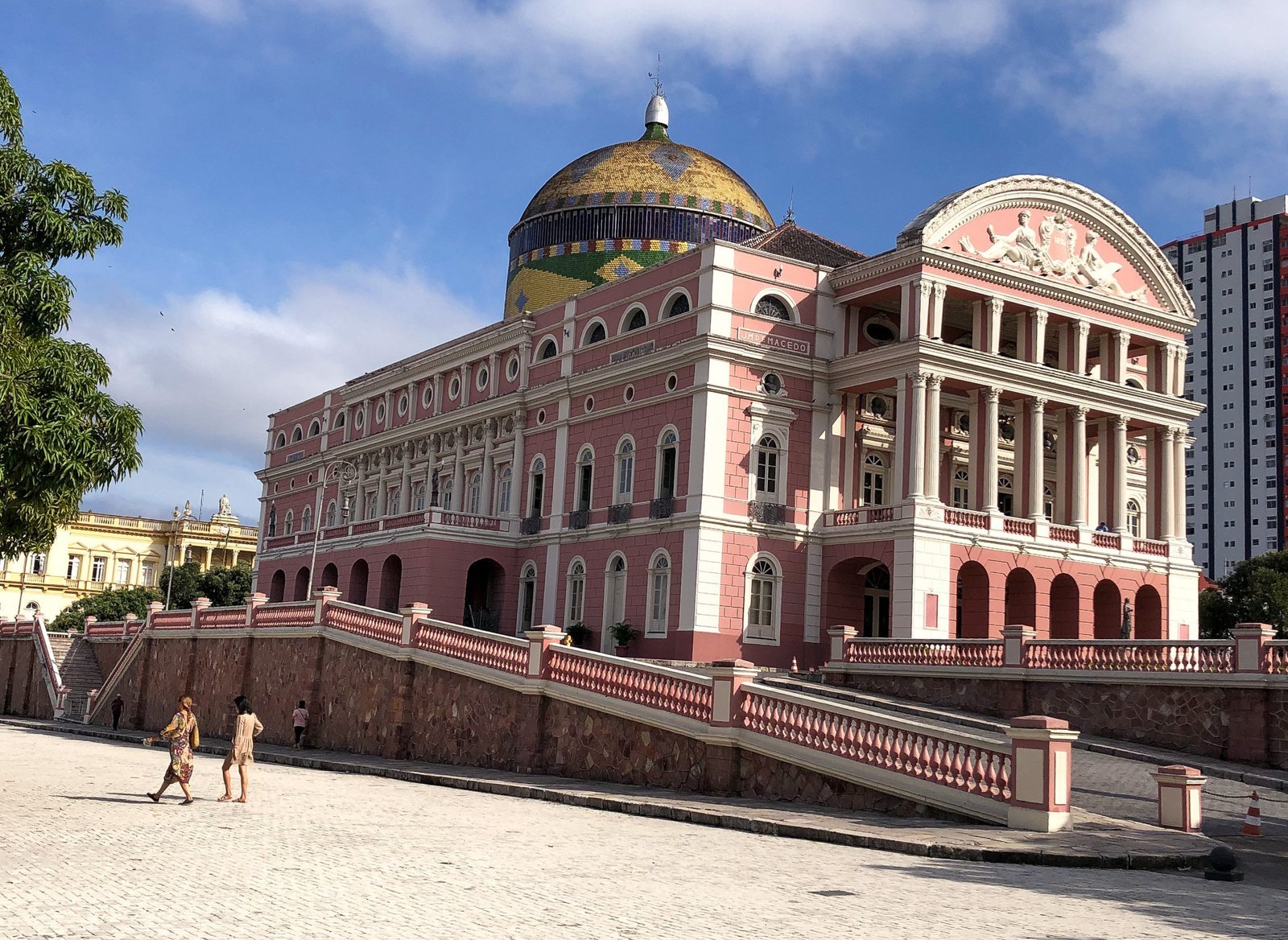 Nowadays the Teatro Amazonas receives several presentations and is open for visitation to the whole population.

Besides this, there are other giant buildings famous for their luxury and exuberance that are easily noticeable when walking in the Historical Center.

Surely, this is one of the most amazing attractions you will find in the Amazon. This is because it is a small demonstration of the fauna and flora very close to the urban area of the city and has easy access.

What sets it apart is its size, as it extends over about 40 square kilometers, which means it’s possible to get a good idea of how big the Amazon is.

The Amazon River is the giant of South America, and is also one of the most amazing natural attractions you will see in the Amazon. The Meeting of the Waters, as it is popularly known, is located about 24 kilometers south of Manaus, when the Rio Negro meets the Rio Solimões, forming the Amazon River.

A curiosity about the Solimões River if you want to know the Amazon is that when it is born at its mouth in Peru it is known as the Amazon River, and when it enters Brazilian lands it is called Rio Solimões. Only then when the rivers meet does it become the Amazon River.

While Black is as the name implies, almost Black, Solimões is much lighter and clayey. But they do not mix immediately. Instead, for miles on end, the two rivers run the same course, but apparently separate, creating a two-tone effect which is as captivating as it is mysterious – at least until your guide explains what’s happening.

Where to eat in Manaus

Pirarucu, the largest fish found in the Amazon, is a very popular dish. The Tambaqui de Banda restaurant is a great place to try the pirarucu, the tambaqui (which is a super popular fish), and many other typical dishes from the Amazon, with average prices.

Coco Bambu Manaus offers the sophisticated version of the dishes of the northern region. For a simpler but still tasty cuisine, visit the Morada do Peixe Restaurant and order the baked tambaqui. You can enjoy the beautiful view of the river while you taste its food.

In a jungle hotel there are many possibilities, from activities such as canoeing, interacting with the porpoises, focusing on alligators, diving in the river, visiting riverside communities or even sleeping in a hammock in the middle of the forest.

The most fantastic thing about this experience is that you will really enter into an area of connection with nature, being able to get the senses that nature can offer, be it listening to the sounds of the birds, observing the fauna or experiencing a different cuisine. All this and much more is possible in the Amazon.

Now if your question is how to choose the ideal jungle hotel, it is necessary that you analyze the type of experience you are looking for and what budget fits in your pocket. There are hotel filters that vary a lot. While some jungle hotels have packages that go from $600.00 for three days, there are others more sophisticated in which the daily rate is above $ 1.000,00. The difference between them is just the structure from one hotel to another, but the experience is the same!

Indispensable to lie down in a hammock and look at the sky in the late afternoon enjoying the degradation of colors that reflect in a great natural mirror, the river.

Experience aboard a boat

There are several tours that can be done in the Amazon on board a boat, due to the fact that the main way in and out of the region is by river (rivers).

Therefore, it is possible to visit some conservation units, such as the Tupé Development Reserve, in addition to the riverside and indigenous communities that surround it, such as the Cipiá Indigenous Community.

It is possible to go to Anavilhanas and sight a variety of aquatic species that lie between the islands, such as the red river dolphin, the ox fish, the giant otter and the otter. In Anavilhanas, there are also species considered to be endangered such as the hairy maracajá, giant anteater and the jaguar.

There is a variety of bird species and approximately 232 are catalogued.

Is it worth coming to the Amazon?

With very rich fauna and flora, the Amazon offers many reasons to visit. The meeting of the waters of the Rivers Negro and Solimões calls the attention and arouses the curiosity of those who see the phenomenon up close.

And it’s not just the thriving nature that takes over the place. All the infrastructure offered has improved a lot in the last years and this makes travelers choose it as their travel itinerary.

There are those who seek adventure and ecotourism. Others prefer just to relax and enjoy quiet days and there are still those who prefer to develop academic and study activities with so much fauna and flora at their disposal.

Be prepared for many boat crossings, as several cities are only accessed this way.

Even if you are used to the heat of the place where you live, know that in the Amazon the heat is even greater!

Therefore, keeping yourself hydrated by drinking a lot of water is the main rule during your trip. Don’t forget to pass both the repellent and the sunscreen for your total protection!

Now to finish with a golden key, we will highlight five reasons for you to visit the Amazon!

Jaú is one of the largest National Parks in Brazil and presents an extremely important ecosystem, with a fauna and flora that includes many species exclusive to the Amazon.

Visit a farm where the process of rubber tree exploration was recreated, and see how this important commodity of the last century was extracted and treated. Pay attention also to how the workers of these farms lived.

There are several opportunities to know in Manaus the remnants of the wealth brought by rubber exploration. The architecture is the main one. Explore the colonial history of the region and admire the impressive architecture, palaces and cultural events.

At the point where the Rio Negro and the Solimões meet, the two bodies of water do not immediately merge, it seems that the rivers flow parallel. A unique and unmissable effect.

Many tours in the Amazon depart from Manaus. The largest tropical forest in the world is home to many species of birds, fish, monkeys and much more.

Well, now that you know the ways to know and explore the Amazon, it is your turn to tell us what you are most interested in knowing when visiting this beautiful destination.

And if you have any difficulty in thinking, we will help you! Accessing our digital platform, you will find a variety of nautical packages aboard our boats and live incredible adventures in the Amazon!