Enjoying the end of year vacations in the city of Manaus

Vacations in Manaus can be unforgettable. If you visit Manaus once, you will come back again to appreciate the beauty and the Amazonian culture. Famous not only for being surrounded by rivers and forests, this city is also known for being the guardian of many stories and has customs and experiences of the most diverse in Brazil. So, if you were looking for a destination to visit during the vacations or during the end of year festivities, read this article until the end!

Get to know the city of Manaus

The whole year is summer

If you love sun and warmth, this is the right destination for you. Here in Manaus the heat prevails almost all year round, be it winter or summer. The fact that the city has a humid air makes this feeling that it is always warm.

In this destination there are no seasons, but what we call “seasons”, and the predominant ones in the city of Manaus are the rainy and dry seasons (which also rains, but less frequently).

And for a warm city like Manaus, what could be better than a floating one or a beach to refresh yourself?

And for those who think there is no beach in this destination, they are wrong! In Manaus there is a variety of natural beaches that are formed in periods of drought and that make an incredible landscape.

You can visit the main beaches around Manaus, which are Dourada Beach, Lua Beach and Japonês Beach.

Praia Dourada Beach receives many visitors precisely because it is surrounded by floats, which have great infrastructure, good cuisine, a very tropical sound and that make the atmosphere of the place even more Amazonian.

Praia da Lua Beach is also one of the most famous beaches in the city, because it has a half moon shape and has white sands and a smaller flow of people than Praia da Ponta Negra Beach. It is one of the main meeting points for bathers in the city of Manaus. The village of Paricatuba is known for the ruins of a deactivated manor house at the beginning of the century. But besides being recognized as a historical site, this place is very visited for being surrounded by beautiful beaches bathed by the waters of the Rio Negro.

Floating in the city of Manaus

The presence of Casas Flutuantes has become a great attraction for those who visit this city, providing the visit even more pleasant, with plenty of comfort and convenience.

In Lake Tarumã, the region is taken by floaters who have a good infrastructure and have varied prices for the days of the week.

If you want to travel to a place to taste great dishes and outstanding cuisine, come to Manaus!

There are regional dishes that are very sought after by tourists, such as the famous Tacacá, Tucupi and Tambaqui. Some very famous restaurants in Manaus: Tacacá da Gisela, Tambaqui de Banda, Morada do Peixe and Banzeiro.

Destination marked by its history

Formerly known as “Belle Époque”, the city of Manaus was marked by the exploration of latex extraction, which started the rubber cycle and resulted in several historic buildings and constructions, such as the famous Teatro Amazonas. The Amazon region went through a rapid economic development and received thousands of new residents, both from other parts of Brazil and for people from various parts of the world. Because of this, the Historical Center of Manaus received a lot of architectural influence present in many places, being the majority from Europe. Manaus is a city that has a tropical and wild nature, and different from what many think, it is a big city and has about two million inhabitants. It is an economic and industrial center, besides being the base for many important scientific researches that seek to unveil the mysteries of the local fauna and flora.

Tours in the Historical Center

Bernardo Ramos Street is the first and oldest in Manaus, according to historical records. Created on the island of São Vicente together with the construction of the Fort of São José do Rio Negro, and marks the process of urbanization in the Amazonian capital, used as a proposal in the process of revitalization of the Historical Center.

Located in front of the Largo de São Sebastião and the Teatro Amazonas, in the historical center of Manaus, the Centro de Artes Visuais Galeria do Largo is very important for the history of the Amazon population and a great tip for tours in Manaus.

Located in front of the Largo de São Sebastião and the Teatro Amazonas, in the historical center of Manaus, the Centro de Artes Visuais Galeria do Largo is very important for the history of the Amazon population and a great tip for tours in Manaus.

Largo São Sebastião is a great place for those who enjoy leisure and cultural activities. Generally this environment is very calm and has good lighting, besides being located near iconic buildings such as the Teatro Amazonas, São Sebastião Church, Largo Gallery and much more.

The majestic Amazon Theater was built in the period of Amazonian wealth, known as Belle Époque, where the latéx extracted from the rubber tree fomented the Amazonian economy.

Recently inaugurated, the Óscar Ramos Cultural Center bears the name of one of the main Amazonian artists.

It is located at Bernardo Ramos Street, one of the oldest streets of Manaus, close to iconic monuments and known in the historical center. Because it is a relatively new cultural center, there are still people who think it is an old privately owned house.

Built in the 19th century specifically to serve the facilities of the Judiciary of the State of Amazonas at the time, the Palace of Justice is located on Avenida Eduardo Ribeiro, facing the Teatro Amazonas.

In the Cultural Center, the Crime Museum room, where the most famous crimes of the city of Manaus are shown, the Jury’s Court rooms and the Full Court Room.

In a jungle hotel there are many possibilities, from activities such as canoeing, interacting with the porpoises, focusing on alligators, diving in the river, visiting riverside communities or even sleeping in a hammock in the middle of the forest.

The most fantastic thing about this experience is that you will really enter into an area of connection with nature, being able to get the senses that nature can offer, be it listening to the sounds of the birds, observing the fauna or experiencing a different cuisine. All this and much more is possible in the Amazon.

Now if your question is how to choose the ideal jungle hotel, it is necessary that you analyze the type of experience you are looking for and what budget fits in your pocket. There are hotel filters that vary a lot. While some jungle hotels have packages that go from $ 600.00 for three days, there are others more sophisticated in which the daily rate is above $ 1,000.00. The difference between them is just the structure from one hotel to another, but the experience is the same!

What to do in a boat in the Amazon

In the Amazon there is a variety of leisure options and natural attractions to visit.

How about seeing the edge of Manaus aboard a boat, being able to observe the highest constructions of the city, as well as the historical and important constructions that were part of the golden age of rubber?

Its view, from the river to the city, is able to see the old building of Miranda Côrrea Brewery, today deactivated and abandoned, but that has a beautiful architecture.

Interaction Platform with the Botos

We can mention the Platform of Interaction with the porpoises, a natural spectacle where you can see the most docile aquatic animal that exists and lives in fresh water.

The Phellipe Daou Bridge, or simply, Rio Negro Bridge. Aboard a motorboat it is possible to see up close the magnificent structure of the bridge that connects Manaus to the city of Iranduba. When passing under it, it is possible to make photographic records. It is considered one of the largest gabled bridges in Brazil.

In addition, it is also possible to visit some conservation units, such as the Tupé Development Reserve, in addition to the riverside and indigenous communities that surround it, such as the Cipiá Indigenous Community.

It is also possible to go to the RDS do Jaú, a beautiful place that provides a splendid view in the late afternoon.

Amazing adventures in the Amazon require incredible landscapes, and the Archipelago of Anavilhanas, near the town of Novo Airão, is a paradise full of beaches during the dry season and has a degradation of colors at sunset. It is a great destination to rest and to thank for a pandemic in the world that has come to an end.

In Anavilhanas there are also species considered to be endangered such as the hairy maracajá, giant anteater and the jaguar.

There is a variety of bird species and approximately 232 are catalogued. Aboard a regional boat, in this paradise, it is possible to get a unique view of what is best in the Amazon.

In our platform you will find boats of different models such as boats, yachts, sailboats and boats of different sizes and capacity of navigators (you and guests), according to your needs. Without worrying about having the qualification to pilot the boat (the captain and, if necessary, the crew are included). 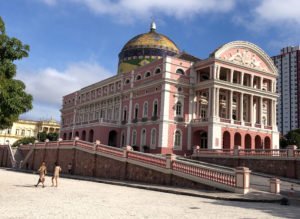 The most cited and sought after historical attraction when commenting on Manaus, the Amazonas Theater is loaded with historical beauty and many mysteries that still